Aurora Cannabis (ACB.V) contacted patients late last week to inform them that the firm is offering a product recall on some cannabis products sold to consumers last year.

The recall is due to their sourcing overflow product from Organigram (OGI.V), which has infamously recalled product all the way back to February of last year, announcing their situation in one of the shortest company news releases in memory.

Unlike Organigram, however, Aurora’s contact with patients had relevant information included and laid out exactly what the product recall was related to: 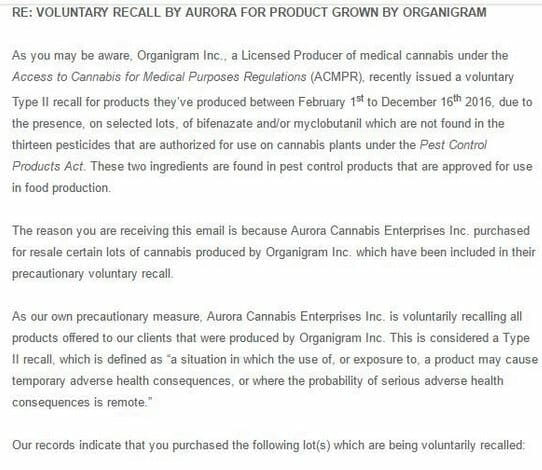 Again, Bifenazate and Myclobutanil are not only disqualified from use in medical marijuana (Myclobutanil creates hydrogen cyanide when burned), but the levels found in Organigram’s testing surpass those allowed in food production as well, a point revealed by Health Canada in a bulletin about the issue, but not revealed by the company itself.

Aurora, meanwhile, came right out this morning with a news release that detailed the situation:

On January 13, 2017, Aurora initiated a voluntary recall of product purchased from another licensed producer and resold to clients. The other licensed producer had previously initiated a precautionary voluntary product recall, which affected a relatively small quantity of product resold by Aurora. The recall is not anticipated to have material financial or operational consequences for Aurora.

Short and sweet, but relevant info, especially for investors. The same release also updated investors that the company is no longer involved in any legal disputes, that its facility expansion continues, it shared details of it’s JV with Radient Technologies, and that it has hit 12,000 patients in its first 12 months. Admittedly, it’s a standard IR tactic to bury your bad news in good, but at least the company is out there talking. Unlike Organigram.

It’s not like Organigram has been too stretched at HQ to get news out; their latest news release relates to a new hire, rather than the ongoing recall that could cost the company millions.

This continues OGI’s strategy of deflection rather than admission, which began when it first announced the product recall five minutes before the close of trading for 2016, and a note about the expansion of that recall just prior to another release about real estate. We tried to call the customer support line at Organigram last week for answers (and recorded the call), but every option sent us back to the main menu, as if the company was on lockdown.

Equity.Guru is also hearing the Organigram situation has Health Canada inspectors at the doors of several other LPs to see if they’re also swept up in the drama. Social media reports that HC was at the Supreme Pharma (SL.C) facility in Ontario recently have not been denied, though also not confirmed. While more stringent testing will never be a bad thing, I dare say Organigram’s situation is not pleasing others in the business, who are wearing the usual “LPs don’t give a shit about patients” routine from activists and having to root through their sales records to see if they did business with Organigram and will need a recall of their own.

Worth noting: We had a comment on one of our stories from a reader, Scott, who says he ended up in the emergency room after consuming OGI product, and that he showed symptoms of cyanide poisoning.

I have purchased all my MMJ from organigram from august to December of 2016. I was at the hospital ER day after I used the product I purchased from organigram. I was showing symptoms of cyanide poisoning but my doctors couldn’t figure it out as I had no idea I had been exposed to the hydrogen cyanide which is produced when Myclobutanil (banned pesticide [allegedly used] by ORGANIGRAM) is smoked or vaped. Respiratory issues, difficulty breathing, muscles tremors, vision probs, rashes, muscles pain, joint pain, night sweats are just some of the side effects I have been experiencing since August when I received MMJ from Organigram. I continued to use their products up until I received word at the end of December that I may have contaminated Marijuana. Anyone else experiencing these symptoms?

OGI stock is down today, though not substantially. Aurora is up.