Organigram (OGI.V) recall situation is as bad as we thought 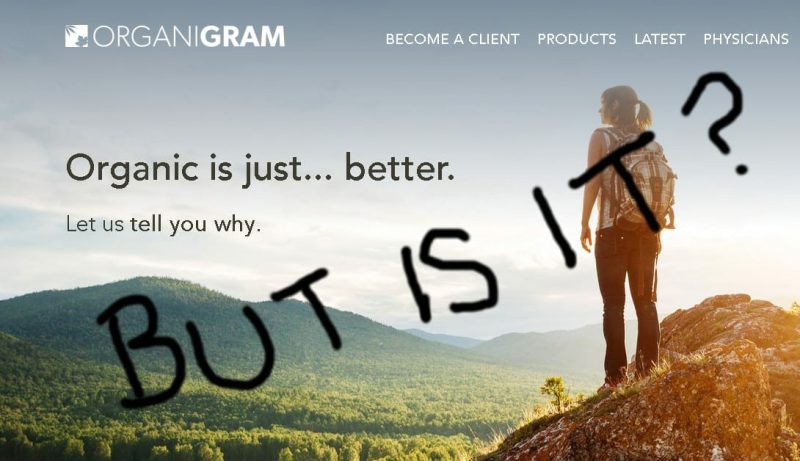 The company isn’t taking calls right now (literally, we spent 20 minutes last night trying every option on their phone system and couldn’t get through to customer service in any way), but the expanded product recall situation at Organigram (OGI.V) is every bit as bad as we feared, according to information posted by Health Canada Wednesday night.

Turns out the recall, which the company admitted in a brief news release a few days ago had been ‘expanded’, but opted not to explain how, or for what, is a big one.

After initially recalling product sold recently, the expanded recall includes flower and oil products sold all the way back to February of last year.

That’s correct – almost a whole year of Organigram’s business, in which they sold millions of dollars of medicine to Canadian patients, has to be sent back and/or destroyed.

Additionally, Health Canada explained why the product was tainted:

On December 28, 2016, Organigram Inc. initiated a voluntary Type III recall after 5 lots of product tested positive for the presence of low levels of myclobutanil and/or bifenazate which are not found in the thirteen pesticides that are authorized for use on cannabis plants under the Pest Control Products Act. These two ingredients are found in pest control products that are approved for use in food production.

On January 9, 2017, Organigram Inc. initiated a voluntary Type II recall, following subsequent testing which identified additional lots containing residual levels of myclobutanil and/or bifenazate that exceeded any of the levels permitted in food production for these two pesticides. As a precautionary measure, Organigram Inc. expanded the voluntary Type II recall to include all products produced between February 1 and December 16, 2016.

So here’s what Health Canada is saying, in layman’s terms. It’s saying those two chemicals can be used in food production, but not in weed production. But that the earlier Organigram weed was using it at levels that even exceed food production guidelines. 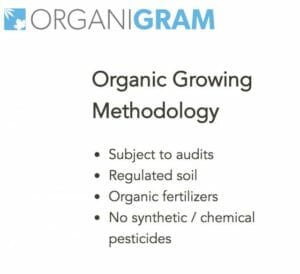 NOTE: Organigram is an ORGANIC CERTIFIED weed producer. That means it’s not supposed to be anywhere near chemicals like these. Of all LPs growing and selling cannabis in Canada, the one least likely to have a situation like this should be Organigram.

Look, it even says so right there on the right: No chemical pesticides. —>

When Mettrum had the same issues, that sucked, because myclobutanil, when burned, produces hydrogen cyanide. It is banned almost everywhere for use in cannabis products for this reason. In fact, other jurisdictions treat its presence as a big deal, and shut down places where it’s found. Health Canada doesn’t appear too bothered, but they’re alone on this front.

But patients looking for the best, purest medicine look to organic producers, precisely because they don’t want pesticides in their weed. Organigram has not just screwed up, but they’ve done so over almost a year, and negatively affected an unknown number of thousands of patients in the process.

Will Organigram refund the price difference to angered users who paid a premium for supposed organic product? Will they my ass: If you call the customer support line, you get tangled in a series of options that send you repeatedly back to the main menu. We tried most of last night and couldn’t get anywhere after repeated attempts.

The Organigram Twitter feed is also silent, not having posted anything since December, and the company’s news releases have, of late, been sent out scant of detail (at least regarding the recall scandal), and usually after close (or five minutes before the last trading day of the tear, right before a three-day weekend).

The stock is taking it in the ass while competitors are racing, the public perception of the company couldn’t be lower, trust in the company to deliver a good clean organic product must now be non-existent, investors have now seen that when the news is negative, the company will choose not to share it in a meaningful and actionable way, and what is the company actually talking about to investors?

That it bought a vacant lot that was so important to the future of the company that it sat for sale since mid 2015 with no offers.

Health Canada’s warning tells consumers, “Health Canada recommends that any individual affected by the recall immediately stop using the recalled product and to contact Organigram Inc. at the following number 1-855-961-9420.”

We tried. They ain’t answering. (UPDATE: They’re answering now, power of the press!)

Perhaps the investor relations folks will. Here are some questions to ask them:

Time to step aside, Denis. You’re not up to the challenge.

UPDATE: Just got off the phone with an Organigram customer who is talking class action lawsuit. He says OGI offered him 20% off his next order to make him happy (initially), and later amended that to a 40% discount on his next purchase. He’s not interested in another purchase, he wants his money back because he bought specifically because OGI is supposed to be pesticide free and didn’t get what he paid for.

Same guy says the company claims the chemicals came in through soil delivered to them, and that the situation is, as such, not their fault. To that, I’ll point to the graphic above that says Organigram uses ‘regulated soil’, and if their regulated soil was sub-standard, and they didn’t determine that for almost a year, that’s most definitely the company’s fault.

Also, for those calling Organigram looking for a better deal, our friend says he was offered the 40% “plus $100” to go away, once he said he would be talking to lawyers. So that’s your new baseline, friends. Keep calling, and keep reminding OGI that a deal that forces you to do more business with them to get any benefit is NOT an acceptable compensation for having sold you non-organic poison.

FULL DISCLOSURE: The only unpaid client bill my company has sat on for the last two years has been to Organigram. That’s obviously a conflict, but we’ve published positive things about the outfit in the past when they’ve acted in the interests of shareholders. They’re not doing that here.