Don’t look now, but Nutritional High (EAT.C) is going on a run

Oh, you mocked them and dumped their stock, you held them up as an example of failure and poured scorn on management. and their share price duly slumped, from $0.08 to $0.05 and finally to $0.03.

But they never took your bait. They never hit back or lashed out, never dumped stock and headed for new deals. Instead they churned, they built, they maneuvered, they developed, and today, they look like they’re about to put out some serious news.

Nutritional High (EAT.C) came out guns ablazing eighteen months back, with a $0.14 debut that showed more volume on opening day than any other stock on the exchange. I was in there alongside them at the time, because I really liked their concept of production lining medical marijuana edibles. It just made sense.

Instead of having a kitchen full of crusties, shoveling weed into cookie dough with their hands and hoping they wouldn’t kill the end user, EAT.C wanted to establish an industrial food production operation that would make each bite hold the same weed content as the last.

And investor jumped in with both feet. For a month, anyway.

After that, as management pointed out that it takes a good year-plus to build a food factory, many investors saw that as a hedge and began to believe the short sellers, who were claiming the whole thing to be BS.

Roll in a ton of underwater private placement money hitting it’s 4-month hold end date and selling in waves, and what you had was a company doing all the right things, and a market screaming at it for not being an ongoing stock promotion.

Eventually I too left EAT, because there was just too many other interesting deals going on that weren’t being actively kicked to death by its own shareholders. But I kept watching.

This past month, it’s been heating up.

This past week? It’s been getting INTERESTING.

First, you had CEO David Posner move to the Chair of the Board. I like Posner a lot, but the move was wise because he was being tarred with the earlier stock collapse’s brush, despite doing everything he said he would in the year since. In his place, the Chief of Operations (for about three weeks), Jim Frazier, who has bulk food processing experience and reportedly found ways to kick costs to pieces in this early weeks at EAT. In as CFO, the former CFO of Bedrocan.

Then, in quick time, you had an $800k raise to knock some cash into treasury, and a $400k stock to debt settlement deal that has already paid big rewards for investors and debtors, as the stock has roared past the warrant point in the last few days.

The company is moving towards the opening of its Illinois operation, a dispensary that has been waiting on official rule changes, it’s talking about going to Germany as rules change there (I’d put less emphasis on those plans just now, but clearly they’re hitting the gears) and the Pueblo Colorado processing plant is being fitted out currently. There’s also been a move to finally launch their Jimi Hendrix licensed range of cannabis products. The company has even clarified what sort of oil processing tech it is installing and complete costings as to how it’ll draw in money.

This is called ‘legitimizing your shit’, and the stock has managed to creak back to life, with a huge amount of volume in the last few days, and a jump from $0.035 to $0.065 – nearly a double in just a few days. 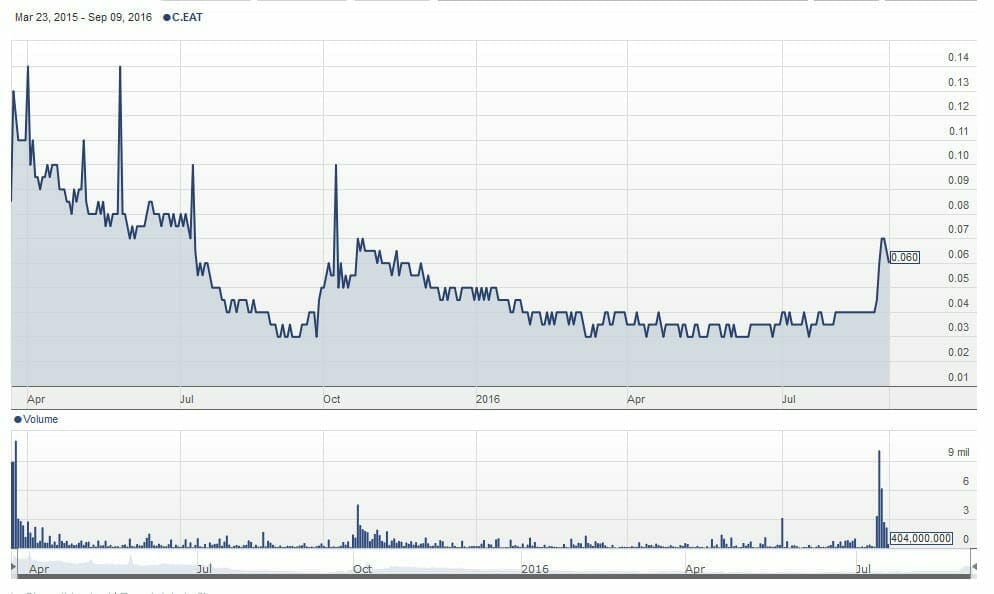 To be sure, that’s a lot of sellers. To be surer, those buying aren’t doing so out of charity. Look at that mass of new interest in the last week.

I was high on this stock a year ago and have taken my lumps from critics since while it has been getting its act together. All along, however, management have said ‘these things take time to put together, and we’re not going to just toss out filler news to keep daytraders happy,’ which is exactly the right way to play it. Now that patience is paying off.

I haven’t bought back in. Yet. But something is surely brewing, and at this price, there’s not much room for the sort of short-selling action that was such a nuisance to the stock early in its lifespan.

FULL DISCLOSURE: Not a consultant or shareholder of the company, but have been both in the past.