So we’ve established Pokemon Go is a mighty big deal. Word has it that Niantic, the company behind it, is bringing in about $10m a day in revenues from the product.

I’ve written a few times about how we might be able to make money from this, noting early that Pokemon has little positive effect on Nintendo, which only owns a piece of the company that is licensing itself to Niantic, even as Nintendo stock was tripling overnight.

And we looked into retail battery products and found, lo and behold, not many companies that were investable.

So how do we make money?

Well, step one is, if you have a business that is near a Pokemon stop (download it now and go see), you’ll do well if you sit on the app all day and buy ‘lures’ to set at the stop. In the game, these attract Pokemons which, in turn, attracts real world people to your business.

Some don’t like this. But most business owners are very much down with swathes of people sitting on their doorstep at all hours. Where I live, the southwest Vancouver fishing village of Steveston, which normally rolls the shutters up at 5pm every day, a triple pokestop location on the docks has become ground zero for local Pokemon players, causing businesses in the location to stay open later and ramp up staffing to keep up. Parking lots are full at midnight and all that monster hunting doesn’t go well on an empty stomach.

But that location is also petering out a hardcore players find better spots in more remote areas. I was out on the Dyke Rd in south eastern Richmond near a quarry late at night when the police showed up to move Pokemon ‘ers away. Apparently parking each other’s cars in three-deep on a single lane back country road is frowned upon, go figure.

Smart business owners are trying to bring those people back, however, with deals aimed at the app users. Some are offering discounts if you drop a lure, others are offering deals for given ‘teams’ within the game. The Penthouse nightclub in Vancouver, home of a well lubed pole, has a sign out front that suggests there are “Rare Pokemon Inside,” which may or may not be true. 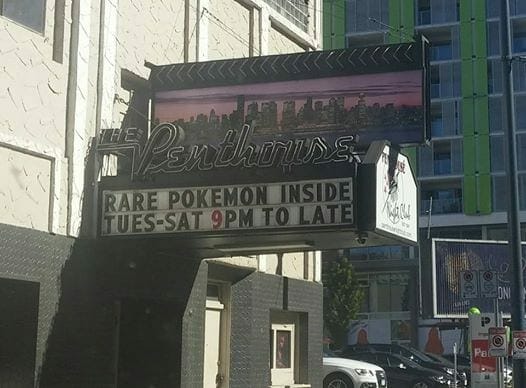 Either way, hands off the Jigglypuffs.

The second way to make money on this is a bit more long range. Frankly, people are spending more money on their hardware than they are on the game itself.

I ventured into a Best Buy this past week because I was sick of my kids draining my phone’s battery playing the game, and I had decided to buy a kickass heavy duty battery pack. The type that goes three days without dying with both your phone and laptop plugged into it. There’d been one on special, according to their website, for $35. When I got there, there was one single battery pack available. I mean, not one of the type I wanted, but one – period. At double that sale price.

And I bought it without blinking.

Out on the docks, where the average Pokemon ner is about 28, split down the middle gender-wise, and making no apologies for playing the game to irritated luddites passing by – everyone has a battery pack.

I talked to a nearby teenage girl briefly on whether she’d already had her battery pack or gone out and got one specifically for the phone, and she admitted she had upgraded her phone to get a bigger battery, then bought the battery pack when even that wasn’t enough.

“You can’t come out and have to go home after an hour, that’s just silly,” she said. “This way I can go five or six hours.”

Her outlay so far:

Small sample size, obviously, but just 5% of this girl’s purchases have actually gone to Niantic so far.

I am too. Belt manufacturers will be getting more business from me out of Pokemon Go because my jeans are falling off me today.

So here you have a phenomenon that is helping people lose weight, helping them meet new people, and generating revenue with more people using it than are using Tinder.

Sorry I can’t point to one stock and say “buy that now because it’s going to make a billion exclusively”, but I can guarantee that electronic stores are going to have their best quarter in years next quarter.

Best Buy (NYSE:BBY) is up about 10% since Pokemon kicked off. Apple (NASDAQ:AAPL) likewise. Alphabet/Google (GOOG) which spun Niantic off last year and has a big stake in it, is up 15%.

My pick: Qualcomm (NASDAQ:QCOM), which makes battery packs and is up nearly 20% since the game kicked off.

Also, still worth consideration: Shorting Nintendo stock, which is still up about 45% from where it was pre- Pokemon and for no good reason at all since any cash it’ll make out of the deal, according to the company, was already baked into their share price before it took off.

There will be new opportunities going forward, however, as Niantic is currently negotiating sponsorship deals with companies that will take over the location of gyms and pokestops. McDonalds has a deal in Japan. But can you imagine a Starbucks deal in North America? Holy cow..

Of course, you might make more money by simply being a media whore and getting large companies to fly you around the world looking for more pokemon. There’s always that.

Or you could file a class action lawsuit for kids showing up on your lawn.