Laguna Blends (LAG.C) doubles in three weeks: Can you hear me now?

Now – Laguna stock has doubled in the past three weeks and the chart looks red hot. 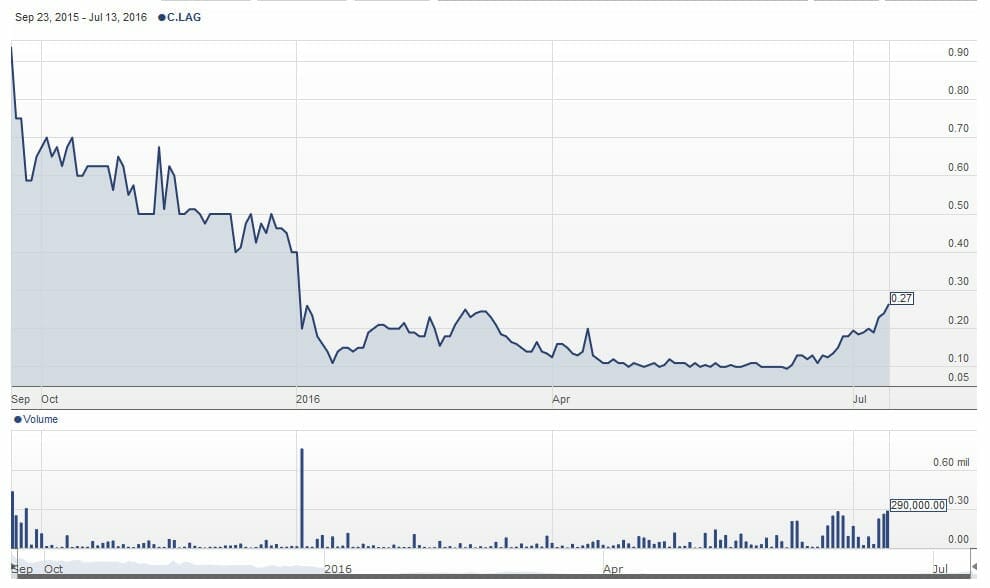 Look at the beauty of that chart. Sure, I was there for the downward ride and got rid later than I should have. But having got back in on my go call last month, I’m now square and looking great going forward.

If I was a ruthless marketing guy, I’d have cut that chart image in half and only shown the recent rise, but honesty is key in this business, and Laguna still has some way to go to make early investors whole.

But look at that volume in the last few weeks. Look at that rise. This is a stock that has finally found its feet and is showing every indication of continuing the upward move.

First, the company has expanded its SKUs, and is now in the CBD skin cream business, which has brought some new buyers into the fold, who may not have seen the same appeal with protein coffee and the like.

Second, the company has actually done what it said it would.

‘Done what it said it would’ is a big deal, to me. I point it out a lot with companies I cover – both if they did, and if they didn’t. You can talk about fundamentals all day long, you can bet on potential or experience or where the market is headed on a stock – but, to me, what always makes the biggest impact in the long run is whether or not a company does what it promised.

Did it take longer than hoped? Sure. Was a rollback part of the plan? Obviously not.

But in terms of actually delivering on the initial pitch, they’ve done that now. Confidence is high. Investment returns are higher.

Let’s explore the new CBD face cream deal a bit, because that’s a new Jenga block in the Laguna Blends story, and while it’s a positive, there are some ‘what ifs’ in the mix.

First off, the headline in the company news release about clinical trials of the product was all sorts of wrong. The kind of wrong you don’t want to be when discussing clinical trials.

“Laguna Announces that the Clinical Trial Data of CBD Cannaceuticals Facial Serum Resulted in a 100% Overall Improvement of the Skin Appearance Within Two Weeks” is factually incorrect, as were statements in the release pertaining to that study.

The clinical trials were conducted by BioScreen Testing Services, Inc., a third party FDA approved lab located in the USA. The test subjects that used the facial serum noticed a 100% overall improvement of the skin appearance within a two-week period.

Ray Grimm Jr., President of Laguna Blends said, “Obviously when you receive a 100% improvement with a product you have a home run type of product with proven science and clinical data.”

No no no. Correct English matters in these situations, guys. In actuality, what the study said was:

Now, that’s still great news. For 100% of people using your product to show improvement, that’s marketable and defendable, based on the trials. But to say the patients had a ‘100% improvement in their skin’ is not only incorrect, it doesn’t make sense. How do you quantify skin improvement in percentage terms?

Then the Laguna release goes on to tell us how big the global skin care industry is, which is always a yawner for me. You’re not going to take market share from Oil of Ulan and Dove any time soon. You’re building something new within that space. Just do that and leave the billions talk to later down the road.

Regardless of those pedantic grammar hiccups, the news was pretty great coming out of that study, and the market responded nicely to it.  The Cannaceuticals line features eight products that it appears Laguna is close to securing for, frankly, not a lot of money. That said, the deal is exclusive for only two years, so the clock will be ticking when the deal gets real.

“Skin care is one of the largest direct sales categories and woman are amongst the largest segment of the direct sales market. Assuming we are able to acquire rights to these products under a definitive agreement, we anticipate that this product category will position Laguna to be a player within the direct sales industry.”

For mine, Laguna is a play that will get stronger as it goes. Those affiliate sales networks can be real moneyspinners when the right product hits the right sales team, and Laguna has stacked itself with some big affiliate selling names.

If you jumped in when I said it was time, I’m glad you’re swimming in readies now. I’m pretty sure when that deal goes definitive, we’ll see more activity in the stock, so if you really want to take something off the table now, by all means, but leave something in there for the weeks and months ahead as sales numbers come in and new products follow.

The old saying says, you’ve never lost money until you sell the stock, and the Laguna story really plays that out. Once more into the breach, friends.

FULL DISCLOSURE: I’m a consultant to the company, own stock in the company, and drink the company’s product. That leaves me about as conflicted as you could possibly be, still, I hope my straight talk about the company’s failings over the past year demonstrates that I’m no pumper. Laguna has earned their praise of late, and the stock chart confirms that. Do your own DD.