You may recall my talking about a little startup called LOOP a few months back that has plans to open scooter sharing programs around the world, starting with Vancouver, London and Beirut.

If not, you’ll find it here.

More press landed earlier in the year at VanCityBuzz.

No, it’s not this Loop scooter:

It’s an electric scooter – basically a light moped, that can be driven by anyone with a regular old drivers license, booked through an app, and parked anywhere you want.

LOOP is now live, at least on the markets (LUP.C), where investors in the $0.20 financing round were enjoying seeing the stock open at $0.25 on Friday.

LOOP’s deal is they have a technology that allows them to keep track of electric scooters using a bunch of exclusive telematic data, including payment systems, membership systems, tracking, energy usage, etc etc. They want to have spots around town where, much like an EVO car or rental bike, you could use an app to take a scooter out for the day.

LOOP wants to sell franchises in cities around the world, and take a fee up front on the sale of the bikes, and a 10% piece out of revs on each deal at the back end.

This is where, frankly, the idea gets a bit messy for some potential investors. Franchises are fine and all but, with the world’s attention on Uber and what it has brought the transit world, tech investors ideally want to see a global rollout quickly, not a city-by-city flow that could take many years and includes hoping each franchisor knows what they’re doing, can work with the city to get permitting in place, and can finance the early stages of what is essentially a local startup.

LOOP understands this and says, invest in us anyway, because we can make good bank just on the equipment sales.

And they can. And they have. Already, before an engine is revved in anger, they’ve got a 200-piece $100,000 purchase order for the telematics from a New York motorcycle company, and a 3,000 piece order from the $14 billion Indian auto manufacturer Mahindra & Mahindra that we can breakdown into an assumption of around $1.5 million in revenue. The company says it gets around 25% margin on those deals, and that it has around $3 million in the pipeline. 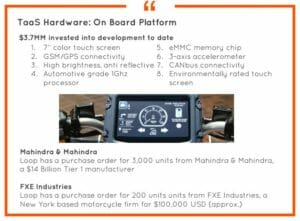 Not bad before the thing even starts.

Current share price puts it at a $8.3 million market cap, which is fair. Over $3 million has gone into the telematics development, which is reasonable in terms of tech budgets involving hardware and software development.

Anwar Sukkarie is the CEO. If you don’t know him, he built WebTech Wireless, which he turned into a $400 million giant in the telematics and fleet management game. A while back, I was kicking the can on Moseda Technologies (now Reliq Health Technologies (RHT.C)), which was trying to lever its way in on WebTech’s business. Eventually it found an easier road in telemedicine, because WebTech is a beast. 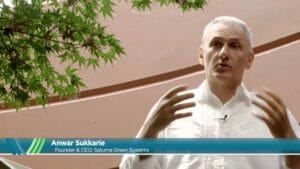 I’ve met with Sukarie and he’s an interesting cat. I did my best to rattle him with apocalyptic what-ifs on his business plan, and he stood tall against my words, giving solid answers and surprisingly grounded optimism.

I’m not going to tell you this is the next Uber. It’s not. It would need to get super capitalized, super quick, and roll out globally in order to own a sector like Uber does.

But it’s interesting. If Sukkarie can pull off Vancouver and London by year’s end (I’m not really concerned with Beirut as a test case), that’ll be a great launchpad to move quickly across the US, which is where big money will come.

In this sector, value is rarely based on revenue, but rather on market penetration. Vancouver needs to be a sea of orange scooters, and this thing goes hard from there.

FULL DISCLOSURE: Not connected to the company in any way, but I do own some Reliq stock.