Everest Ventures is now Halio Energy (HOL.V): And the share situation is nuts

I’ve spent the last six months watching intently as a new shift has made its presence felt in the junior investing space. I like to call it “I don’t know what the hell I’m investing in, but I’m up 400%” plan.

It started, frankly, with Lithium-X (LIX.V), which climbed from zero to shut up on the strength of local philanthropist/miner/refugee saviour/good guy Frank Giustra’s involvement, as well as lithium’s extreme hotness as a sector (and every stock promoter in town jumping on early).

LIX actually had news to back itself up, but it’s run swept every other lithium stock into multi-bagger territory, and spurred a bunch of non-lithium companies to become lithium companies at the same time.

So when the largely unknown Golden Secret Ventures (GGS.V) suddenly torqued from $0.05 to $0.12, I figured maybe it was another lithium deal in the making and jumped on, sight unseen. I jumped off at $0.57 a few weeks later. It was the most profitable reckless, careless share purchase I’ve ever enjoyed, and I still have no idea what GGS will be doing.

But, fortunately enough, Giustra happened to become involved and that brought liquidity in a fierce way. The same happened with Rouge Resources (ROU.V), which went from $0.05 to $0.40 in a morning when Giustra’s slice of the pie became public.

It turns out, if you look at the numbers, if you’d invested in everything Giustra has touched in the last year, you’re up an average of 600% on each company. A six-bagger, with no news on the back of it other than “I’ll have what Frank’s having.”

This has caused some real weirdness on the markets, as companies with good fundamentals, such as one of my favourites, Distinct Infrastructure (DUG.V), sit and churn while companies with no news to speak of fly ever higher on nothing more than suspicion.

Christ, you couldn’t get arrested with this little evidence of actual activity, but a lot of high risk/high reward types are now actively searching for big swings over several days with no news to back it, digging through SEDAR filings (which is the worst activity on the internet – seriously, can we update that damn website from it’s 1996-grade web 0.5 origins?) to find the names of anyone and everyone who might have got in on a private placement raise.

Which leads me to Halio Energy, which was Everest Ventures last week, and TAD Mineral Exploration before that, and blahdy blah blah before that.

Longtime shareholders of what is now Halio quite possibly don’t even know they have a stake in the company. They’ve had a bunch of rollbacks on bad deals over the past several years and watched their investment drop and drop and, for some of them, they’re probably so far under water they don’t give a crap about a double, or a triple, or a gift basket, or even a small automobile. They invested in some pie in the sky deal way back when with other management and directors and ticker symbols, and now it’s just that stock sitting in their portfolio that’s too cheap to bother selling.

So nobody is selling HOL shares right now. But some people have been accruing what little there is available, on no news and and no transferable goodwill. 1000 shares show up on the ask, they’re taken down quickly, and the share price keeps climbing.

Mexican standoff. So why not sell?

Because something’s happening. I wrote about this stock a month back, then again last week, and both times I mentioned the only piece of news you could find about the company – that it’s been bought into by, at the time, Halio Capital, an investment firm run by Joe Casabona.

Who’s that? Well, he’s a director of PDC Energy (NASDAQ:PDCE), a $2 billion+ company that rode out the oil dip like it was an off-site corporate trust exercise.

“Just close your eyes and fall backwards, Cindy, we’ve got you!”

Before that he spent a bunch of time as Executive VP of Energy Corporation of America. Now, I don’t know how much that company is worth because it’s privately held, but the board of directors features people with names like Coors, Forbes, there are former state governors, a former assistant secretary of the Department of Energy, a former Chairman of Deloitte Touche, the founder of Doubleclick, there’s multiple guys with numbers in their name.. it’s sick.

Here’s Casabona hanging at the NASDAQ last year (second from the right). 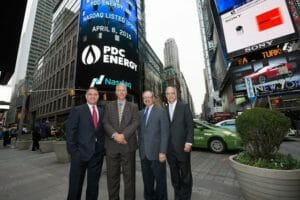 And this is the company Joe Casabona kept for much of his career, which tells me he’s not just tossing about a shell for a quick profit.

Casabona is also retired, or was until he started Halio Capital and started picking up stock in what is now Halio Energy.

So I called the company to get some info. Any info. And I got stonewalled. As an investor, as a journalist, they had nothing to share.

They said I could probably get on a call with Casabona in a week or two.

Not tomorrow. Too busy. Not Monday. “Too much to do right now,” I was told.

We all spend a lot of time wistfully wishing that we were in on a big deal early, when the cheap stock was floating about and while the big fish were putting together their plans. But we normally get in last while the 1%-ers make it rain at Hy’s.

My take on this one is, while we’re not getting the 5c stock, Halio would rather I not be talking about this thing while there are still old-timey shareholders out there sitting on their paper, unaware that something is building behind the scenes. They’d like to be grabbing what they can, rather than watching me run my mouth.

The company just closed a tiny raise – $200k or so. That’s either a positioning round, or it’s paper for partners, or it’s all they need to keep the lights on for a month or two while they wait for a better price to do a proper financing with a project in mind.

What might that project be? They’re not saying. “We have a plan, it’s going to be worth talking about,” the helpful person on the phone told me. “But not today.”

In the past, the company had a couple of properties to play with, namely the Hazelton Gold Property and the Athabasca N Uranium Property. I don’t know if they still sit in this company’s hands.

But I know I’m sitting on this stock until I get a chance to talk to Casabona. That strategy, so far, has been good for an 80% profit, on no information, in a handful of weeks. Let’s see how it works out if I let that thinking roll..

FULL DISCLOSURE: I own stock in this company.