I don’t know Everest Ventures (EET.C) from a hole in the ground. Which is apt because it appears they’re planning to make some holes in the ground.

Since the great lift-off that has been Lithium-X (LIX.V), and more recently Golden Secret Ventures (GGS.C), I’ve been keeping my eye out for hitherto forgotten shells that, suddenly, have changed their name, rolled back some stock, and quietly gone on multi-bagger tears off the bottom with little to no news.

Lithium-X has made many very well cashed up for the summer, jumping from 15c territory to over $2 in quick time.

Golden Secret Ventures is looking like it will continue to do likewise, and jumped from $0.20 to $0.60 with little news other than who is involved in the company.

So what should a guy look for to get in on one of these penny-to-pounds babies before it gets all top-heavy? 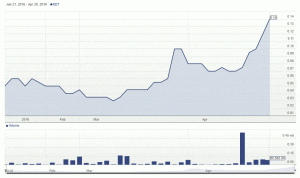 So, that’s a nice chart. But it’s also a month old, topping out at $0.14. I took that screenshot when I first noticed this thing was moving. I wrote about it, but opted to take the story down because it was just too short of info.

First, most of the company is owned by Halio Capital, which is run by a guy named Joe Casabona. He’s on the board of PDC Energy (PDCE), a $2.5 billion market cap oil producer with a share price that has been moving up in 2016, contrary to sector trends.

Since then, the stock has consistently moved up, trading at low volume, sitting now at $0.87 – a many time multiple from that premium-priced financing.

And the volume on that rise has been tiny, because it appears there’s next to no stock out there to be acquired, yet acquired it is being.

It’s not just me, right? Something’s cooking here. If Casabona has something to drill, he now has a company ready to do it.

So what’s the plan? Dunno yet, but it’s definitely in play, and I wouldn’t be surprised if, now the spotlight is being shone on it, news drops soon.

Any updates on Halio? I invested in this stock in April and it has tanked? Any chance of this stock coming back next year or is this a write off?

No news, nobody’s answering my emails, and my money is stuck in there too. email me at chris@equitystaged.wpengine.com and I’ll chat more with you going forward.