Hands in the Cookie Jar send the Cinar Four to prison

It’s official: The creation of children’s TV series Caillou is now not the worst thing Ronald Weinberg was ever involved in. 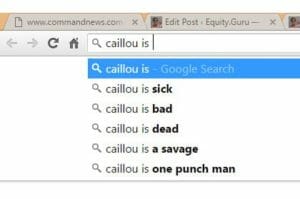 After allegations and a legal pursuit that lasted around fifteen years, former Canadian kid’s TV high flyer Weinberg was sent down to the hoosegow for nine years today.

The crime? Slipping $120m plus out of company funds and off to the Bahamas. Also not impressing authorities, using American writers while claiming Canadian tax credits for Canadian content. Also.. well, it was Quebec at the turn of the 21 century, if you weren’t gaming the system somewhere, they’d kick you out for being too English.

John Xanthoudakis and Lino Matteo, who were also part of the scheme, got eight years a piece. A fourth man, Hasanain Panju, pleaded guilty earlier and was sentenced to four years in prison after testifying for the Crown.

The CRA and Telefilm agreed to out of court settlements of $17m and $2m respectively for the crime of taking fraudulent tax credits.

The three players sentenced today were alleged to have moved funds from the company to the Bahamas over four years from 1996.

Cinar went public in 1993, and was earning $150 million per year six years later. An internal audit in early 2000 found, however, that vast sums of cash had been moved offshore without the board’s knowledge. The men were arrested over a decade later, following a long police investigation.

Anyone with a kid born since 1990 has been victimized – uh, I mean exposed – to Cinar’s work, through such series as Arthur, Caillou, Zoboomafu, The Busy Word of Richard Scarry, Madeline and more things that infected our children’s souls.

Few parents would suggest Weinberg didn’t deserve prison time, if only for bringing the horror that is Caillou to our screens. Assuming he does his full stretch, when Weinberg gets out of prison, Caillou will be a 13-year-old self-centred teenager with hair problems, so the worst may be yet to come.