“It’s a nothing play,” said a fellow business news pundit to me a month back.

Well, it’s racked up more than a double in the time since, and with no hint of lithium or weed around it.

Equitas Resources (EQT.V) announced an innovative plan to finance the ramping up of its gold production in Brazil Tuesday with a long term funding agreement with Cartesian Royalty Group, a subsidiary of the $2.5 billion Cartesian Capital Group.

The deal brings a $5m rolling prepayment gold-backed loan facility and $1m in direct financing through a private placement arrangement, locked up for 18 months.

Equitas CEO Chris Harris, who has three decades in resources behind him, hinted to me a few weeks back (under NDA) that he was working on a big deal that would get Equitas into a place where they might be geared for acquisitions, and he sure wasn’t lying. This deal finances Equitas well into their future, allows them to ramp up production to a healthy place, and helps them expand their resource.

The Gold Prepay is a secured loan to be repaid in gold at a pre-agreed volume and price. For every US$1 million drawn down by Equitas, repayment will require 2,100oz Au if within 1 year of drawdown, or 2,300oz Au if repayment takes longer than 1 year but within 3 years. If the full US$5 million is drawn, repayments would range between 10,500 ounces of gold and 11,500 ounces of gold.

Each drawdown has up to 36 months to be repaid, with payments starting after 6 months. Any repayments made within 1 year of drawdown can be re-drawn again, “revolving” potential borrowing capacity of over US$5 million.

Harris says the deal will get the company through its five year plan to become a mid-level gold producer, and to get to a cash generative position quickly.

And the stock duly jumped 18.75%, having been on a climb for a week prior, with a whopping 5.75m shares traded in the first hour.

Equitas has had good volume for a while with the share price churning more or less in place as a long time holders looked to free up cash and new buyers looked to get deals. But that phase is gone now – EQT is moving hard and fast because, why would you get out when it’s just getting warmed up?

Congrats to those who took it at $0.045 when we first started coverage. Happy to have pointed you in a good direction.

Here’s some pics of Cartesian’s crew doing DD on site. 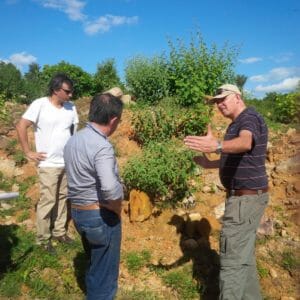 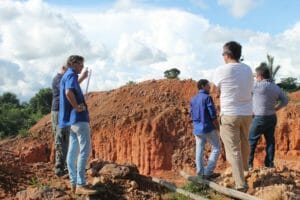 FULL DISCLOSURE: The author is a consultant for the company and stands to benefit from any stock appreciation. Which makes him happy right now.