Why I sold Golden Leaf yesterday (GLH.C) – and bought it back today

Share on FacebookShare on Twitter
It’s been no secret that I’ve been a Golden Leaf Holdings (GLH.C) booster since the thing was a pup. I’ve been a consultant to them. I’ve bought stock in them. I’ve written about them again and again.
And I rode the stock down from a buck to half that.
I’m not a daytrader. If I invest in a company, that’s because I’m sure it’s going to, at some point in the future, be worth considerably more than it is today. I don’t care if that time is a month or a year away. I don’t care if the stock drops here and there, rolls up, rolls down, whatever – because I’ve talked to the team and I know the plan and I think both are kick ass.
That doesn’t always work. When it doesn’t, usually it’s because I got scared. Bad news coming, rumour and gossip abundant, maybe if I just pull out for a bit I can ride out the rundown.. oh, look, it’s doubled while I wasn’t looking.
But yesterday was different. Yesterday I heard some news that I thought would affect Golden Leaf negatively, if only for a moment or twelve. Oregon’s legislators, in an effort to stop idiots burning their homes down trying to make cannabis oil, had put forth some changes to the law outlawing such activities – only to forget that they’d licensed some companies (including Golden Leaf) to engage in such activities.
What was coming out of Oregon was confusing and ridiculous – that those companies might have to cease producing their oils while the government sorted itself out. That they might have to apply for a new license and that ‘they could just stop producing while that was happening.’ I’d heard four months as a possible timeframe. A whole business quarter with no revenue.

So, yeah, I sold most of what I owned in the company at around $0.55. Then I tried to call the CEO to find out what the hell was happening.
The CEO wasn’t taking calls. He was making calls, to the regulators and lawmakers. And, this morning, while weak hands dropped their stake and the share price plunged to the low-$0.40’s, the Golden Leaf team’s movement on the issue paid dividends when the OLCC announced – oops! – it would give provisional licenses to companies like Golden Leaf while the mess was being sorted out, starting April 1.
A statement from GLH: 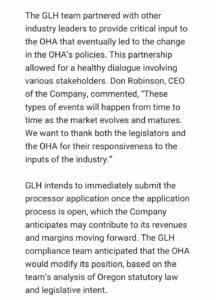 So I bought back at $0.44, earning 20% more shares than I had yesterday.
I had always planned to buy back my GLH stock because I know it’s a $2 company trading at 1/4 of that. But I knew, after watching the market continually trade away the stock on the back of obvious short-seller innuendo and outright lies, that an actual real hiccup was going to put the thing in freefall.
And when your enemies are drowning, in the words of James Carville, throw the fuckers an anvil.

Here’s what I don’t like about Golden Leaf right now:
The way the market looks at it.
That the regulations they do business under are continually shifting.
And they’re a bit thick around the middle, staffing-wise, a situation they’re working on remedying.
Here’s what I love about Golden Leaf right now:
When they raise money, they’re doing so in US dollars.
When they buy into an acquisition target, their reduced share price makes for an attractive ‘all shares’ deal, which preserves cash.
When they buy into an acquisition target, they go for the biggest and best (BMF Washington, that state’s biggest weed grower).
When they do a partnership deal, they go for the biggest and best (Dixie Elixirs, the biggest edibles brand in the US).
They make revenue – so much revenue that it dwarfs all Canadian players, even those with eight times the market cap.
They’re in a massive growth phase, with new extraction machines pouring in the door and new sales sucking down their supply as soon as it’s produced.
They’re building an actual recognizable brand.
They have old school grey-haired guys at the wheel, not market manipulators and promoters (clearly).
They understand supply chains. They understand politics. They understand real business.
They are, as of now, vagaries of the evolving regulatory situation notwithstanding, the largest producer of oils in the US (as far as I can tell), one of the larger weed producers in Oregon, and definitively the largest in Washington.
Their margins are great and getting better, in a sub-sector of the marijuana business that has the highest value-add (oils).
They’re not exposed to the weirdness going on in the Canadian weed sector.
They’re listed in Canada because they want to have full and transparent accounting that can be trusted by investors.
And that all of the above is completely not recognized – yet – by investors in the market.
To be sure, having an average buy-in of a buck does not fill me with the happys right now, but every time I have a spare thou lying about, I’ve been directing it at the under-valued, under-appreciated, over rumor-slathered, beaten like a red-headed stepchild by shorters, market naive but business savvy team at GLH.

Financials are due to pop by end of April. I expect they’ll show all sorts of improvements – and they won’t show, due to timing, any shortfalls due to any production halts during the Oregon regulatory hiccup of the last week.

Oh yeah – and the Governor of Oregon just signed into law bill 1511, that permits recreational oil use and sale in Oregon, which opens Golden Leaf’s main market in a massive way. That bill also shuts down butane cannabis extraction, which is another fat boost to Golden Leaf, as it removes competing products from the shelves.

Will Golden Leaf be higher this time next week? Maybe not. Probably not. Maybe it’ll level out, maybe there’s still weak hands to be flushed. But it will go up in time, in my opinion. I’m happy to bet a lot on that.